"Jack of all trades ,master of nothing"

Every human being has heard it many times in her/his life, we all know what does it mean, so i think no explanation is needed(why unnecessarily lengthen the post).

To give your best performance in life you should have mastery in that subject...whether its STUDY, cricket, football, chess or badminton...it needs long practice, gathering knowledge in that subject for long years and dedicated attachment.

Now whats the biggest fault i have found in our education system is...

The STRATEGY(Format) to teach the student is actually de-focusing them and diverting them form their aim and target.

Hopefully one day our PM or education minister will go through this post and will give this idea a thought.
so, coming to the main points...

Student who is studying in eleventh standard and wants to make carrier in the field of PHYSICS then whats the necessary of existence of ENGLISH ,HINDI/BENGALI , CHEMISTRY AND THE ADDITIONAL SUBJECT ? let me explain...

A student who wants to be a physicist why he needs to spend time behind Hindi/Bengali , in chemistry and in additional subject ?

the general format of XI-XII th standard is...

Three main subjects....physics, chemistry and mathematics
and an additional subject...statistics or biology or something else.

when a student is already from Bengal and have read Bengali till class X standard then why he needs to spend time for Bengali in 11th stand. when he wants to make carrier in Physics  in later life, logically he needs to know English because in later life he have to read books in that language but with the compulsory rule that she/he has to bring pass mark in English is actually diverting...

For a stdent who wants to make carrier in physics the two subjects...Physics and Mathematics are enough.

6 subjects in 18 hours( 6 hours for sleeping and nature's call) means...3 hours per subject

which one you think is better? which one help you two gather more knowledge in the subjects?

now look at the main subjects...there is no connection with one another, they have nothing to do with each other.

A student who wants to make carrier In English why she/he needs to spend time behind philosophy or political science? and vice versa and vice vesra.

The existence of languages like Bengali and Hindi as compulsory subjects is totally meaningless...these are the obsolated languages in global fields and you have nothing to do with these languages if you are not making carrier in these languages.

Till class ten a student learning different subjects ... this concept is good, they should be made aware about the different streams so that they can choose their field of interest but after the tenth standard they should know in which stream and subject they want to make their carrier and this is only possible when the evaluation of a student will be done in proper way,that is...teachers and parents should analyze the student, make discussion with them, so that the students can find out the right direction according to their merit and interest.

Once i taught some B.Tech. students, they were from different streams...like, civil engineering, mechanical Eng, computer science etc and they all had to read...the basics of thermodynamics, relativity etc, logically a computer science student has nothing to do with space-time basic rules or with entropy and Enthalpy....its just a wastage of time,specially when after a certain semester the subjects like relativity or thermodynamics have vanished. why don't they focus more on  the subjects from the beginning which will help the students in their respected streams in future...

To teach relativity in one month....probably Einstein could not do it....when its for the marks....

I think the format used in 11-2h standard and in graduation standard is actually de-focusing and diverting...

6 tuition for six different subjects one more the subject in which the student is weak...

which one is better?

Practice makes Perfect...we all know it...

now if you practice 6 subjects in 18 hours

if you practice 2 subjects in 18 hours

which one will make you more perfect in the subjects?

Its true that form last more than 100 years millions of students are going through this format and have proved themselves in different fields but untill you  try an idea how can you be confirm that this new idea will not make much better students?

A present day Physicist or a philosopher could gather more knowledge if they had not to spend time behind those subjects which presently are none of their use...like biology or Bengali or Sanskrit or Chemistry(the amount of chemistry he needs to know were/is already in their physics books).

I(not only me,rather we) personally know lots of human beings those...

who wanted to be an English teacher/professor and presently they are....now i surprise why they read subjects like Philosophy or Sanskrit?

who wanted to be sanskrit teacher and presently they are doing job succesfully...why did they read Philosophy and English?

who wanted to be Physicist and presently performing excellent  in their field as a teacher/professor...how English/Hindi?Bengali/Biology can help them now?

I don't wanna mean at all that its only the Education System which is responsible for such an illogical format rather its only the Education system that can bring the change  forcing the parents and teachers to be more focused so that the students do not suffer from problem to realize and analyze themselves.

Its a format that has been introduced several years back but now this is working as diversion...de-focusing the parents and teachers and so the students. 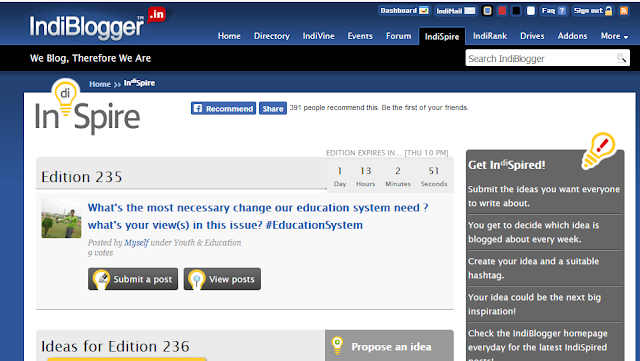 This post is written with the Indispire Prompt , edition 235, suggested by Me, Mine And Myself and selected by bloggers in Indiblogger