What I am trying to say is…hard work does not matter at all…what only matters is FATE.

If you make analysis from the view point of Hard work then a daily labor or a farmer works much more harder than a teacher or a software engineer, but still the labors and the farmers does not have a secured financial condition, rather if only hard work matters then the labors and the farmers should had much more money than a teacher or an engineer.

Ok, let me ask you a question…whenever any terrorist attack happens, then lots of innocent people get murdered…now what will you say…those who got murdered in the attack were not trying hard/working hard to live and to live happily?

In last  summer, when we all were suffering from intolerable heat and always wishing for rain, that time one day a beggar came for begging…her age is nearly 50 years, I gave her money and asked whether she has children or not, she said yes she has a son and a daughter, somehow she has managed to arrange marriage of her daughter, she also informed that her son is physically disabled, he is unable to do much hard work, this is the reason she is begging from door to door, few years ago she lost her husband in an accident. As she is old so no one keeps her as maid servant, she was telling her life story and was regretting, It’s been few months but still I can’t forget her painful words …”it’s all my fate, in this summer others are not moving from near the fan, people are avoiding the sun and I have to beg from door to door and have to tolerate this scorching heat, it’s all my fate.”

Now what will you say my dear believers of Hard work? She is not working hard, is her husband tried hard to die in an accident?

After she went away the first thought came into my mind is…there are lots of women of age 50 years , some of them are spending time in AC, some are enjoying air of fans…

When a writer writes a novel, at first he creates the characters and he already decides what will happen at the end, he already decides how he will present the characters…this is the same thing happens with us, we even don’t know whether I or you will be alive tomorrow or not, still we think we can control our lives, when we travel in bus we don’t know whether it will meet accident or not, till now I have not met any accident but it’s also true that lots of people are dying in bus and train accidents…it has not happened with me but it does not mean at all that I controlled whether it will happen or not with me.

Those who are daily passengers can assure me that when tomorrow you will travel then surely you will not meet any accident? Can I give such assurance to anyone….I cant…

When someone become highly successful then we are interested to hear their stories…..but does it really mean that when he was struggling then there was not a single person who did not work hard to be successful in the same field? Yes there were lots of people…but it was not in their fate that they will get success.

After a extreme try and hard work when someone meets failure then negative syndromes can be easily seen in them, either depression or frustration or reluctant towards life or sometime suicide attempt, because they thought that through hard work they can make anything possible and they never believed in fate, if they would have believe in fate then they could surely accept their failure and could start a new try.

Being a lazy person and noticing lots of incidents how fate can save/destroy a person, I am firm believer of Fate and if you say Hard work and fate (Luck) both matters then I will ask about those criminals who worked hard to prove themselves innocent and now moving freely, because there were people(Police, Lawyers) who worked hard to prove their crime but failed…lots of criminals moving freely and lots of criminals are behind the bars …what comes in between these two categories is fate.

A child is “born disable”… he can’t walk properly, he can’t talk properly, he can’t move his hands also the fingers properly, his body growth is not normal, once I noticed such a boy of age nearly 13 years when I visited a hill area, there are lots of such boys and girls…now tell me how they can make their lives normal through hard work? What you wanna say…they don’t have desires like other normal girls and boys, don’t they want to play football in the ground? Don’t they want to run? Don’t they want to climb in the tress? …they have desires, they have dreams but they are unable to do anything normal…..why ever one is not being like Helen Keller?

If you say only hard work matters (or hard work + luck, both matters) and give examples of successful people then I will give you the examples of physically disabled girls, boys and other people like the farmers, the labors, the beggars…

So what I wanna say? Do I wanna say that you don’t do any work and sit ideally, spend your time lazily… no not at all, I wanna say that whatever you are doing is already fated, whatever path you choose and thinking that “I have chosen it” then you are making mistake …everything is decided from the day you have born, you are just performing.In this context I must inform you that on his success Napoleon Bonaparte(I can’t remember exactly who said this) said “it is fated that I will work”.

I can’t exactly remember the chapter and the Sloka number, but I read in SreemadBhagwat Geeta…”Ahonkaro BimurHatma Kartahomiti Mannyate”---means, the soul is full of pride and so it thinks that he is the master of everything.

“it is already decided that they will die, I have shown you the future, it does not matter what will you decide, I have already decided their death and death through your hand, so you don’t take tension, be the medium(Nimitto) and perform your duty.”

[This is my translation, meaning is almost same, written in my way, for details you can go through the verses and their meanings]

So, everything is decided...what will happen, by whom it will
happen and other everything.

It’s my good luck that I am not physically handicapped and can write this post in support to LUCK/FATE.

It’s your good luck also that you are not physically disabled and can read this post and also can share your view points and thoughts in the comment section…so please, you comments are very valuable for me.

For Fated Work Part 1 click the link given below

For fated Work Part 2 click the link given below 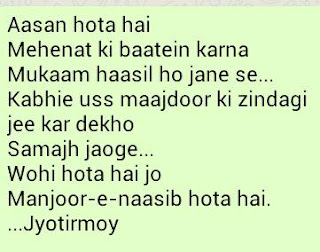 Email ThisBlogThis!Share to TwitterShare to FacebookShare to Pinterest
Labels: Creative