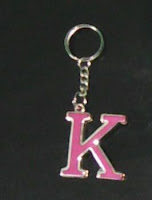 Last Sunday after returning from market I handed over the household materials and also the key ring to Mom. Seeing the ring my sister expressed her calculations

…oh ho!!!! it’s the letter “k”, there are 26 alphabets in English and you have bought this letter, so who is the girl, tell me.
She was repeatedly asking the question but I was silent, just made a fake smile.

Almost one hour was passed, it was 12:10pm, sitting in the dinning I was taking my tea and was about to go for bathing, mom went upstairs for Puja purpose, father was busy with his writing in his room. My sister appeared again with curiosity and her suspicious mind and again asked

…tell me who is the girl, where she lives? Is she from this town or from other place, what does she do?

I was taking tea silently.

My sister started again
…look from half an hour I was trying to sort out who the girl is? And if you think you will avoid my question then it will be harmful for you, I am gonna hit you. Ok ok, am sorry; pls tell me who the girl is.

What I have noticed about human psychology is…when someone starts to use her/his brain too much then common sense becomes vanished.

So I replied her

…First of all you must remember that the initial of our Mom is “K” that’s why I have bought it.

With surprised eyes she said
…I guessed it but it was hard to believe coz you have deep believe in the foolish act named “love”, so I thought “K” is the initial of someone special to you.

So finally I revealed the truth

…actually I liked the colors of the key rings, the shop owner brought key rings with all the English alphabets but 24 alphabets are already sold, only two were remained, the letter “K” and an another letter and I know you can guess what the another letter is.

Telling this I left the dining as soon as possible.