It’s been long eight years I have not visited my village during Durga Puja, in last eight years hardly three-four times I have gone there only for some necessary works though I don’t miss the days now-a-days because everything has changed a lot.

Let me share some interesting things about Durga Puja in my village…. 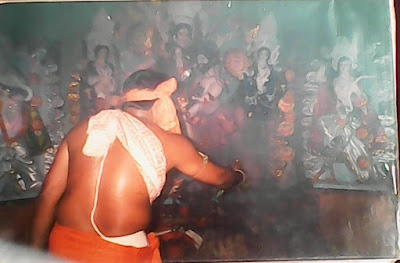 The ritual of Bisarjan is very interesting….the idols of Maa Durga and other god and goddesses are tied with the bamboos and the people of the village takes the idols in their shoulders and walking in bare foot they carries the idols to the pond that is almost one kilometer from the temple.

It was the year 2005 I decided to take part in the Bisarjan, those days me with my family members used to visit our village during Durga Puja, I never took any part in the arrangements of Durga Puja and it’s a big irony coz my father conducted the same Durga Puja as a secretary for long 19 years, then my paternal uncles took the responsibilities even my maternal uncles also.So that year I thought let me take part in Bisarjan. So I got ready with a Bermuda and shirt with a Gamchha in my shoulder. When my father came to know about this he became too much worried. 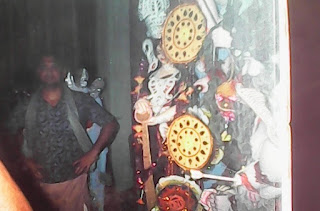 If you wanna take part in Bisarjan then it’s compulsory that you have to drink the beverage that is prepared in a big pot with lots of fruits and obviously with siddi and bhang but those days the boys started to mix whisky also, so I entered the temple and took 3 full glass of that drink…

The truth is…that year I consumed ten full glasses of that drink and then given my shoulders with others and took the idol to the pond. Some people were very surprised seeing me normal after taking so much of that drink…..i did not answer them, just smiled in reply. Actually they did not know…. sharab me utna dum kahan jo hum jaise diljalo ko hila de. 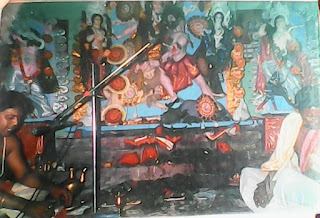 After the Bisarjan the most interesting ritual that happens is….

Everyone comes back home taking bath in the pond and gets ready as soon as possible, the women of the house already keeps the sweets ready, after coming back home and dressing up (mainly traditional dress…Punjabi and Pajama or Dhoti(for elders)) you do Pranams to the Gods and then your parents and other elder ones and eating sweet you will have to visits the house of neighbors, relatives and the closed ones to greet Shubho Bijaya Dahsami, it’s  done by offering Pranam to the elders and hugging the friends, Bisorjan is completed in between 10-10:30pm and then this ritual starts. In every house you have to take at least one sweet for sure and there are some houses those are well known for some special preparations, like there was a grandma who used to prepare fish cutlet for the visitors, it was for sure that you will get fish cutlet when you will visit her house. That year I visited total 22 houses and ate 22 sweets and other delicious preparations….it’s said that after drinking such addictive (The beverage I have mentioned above) drinks if you eat sweets then you will not be able to remain awake...

It need almost 2 hours to complete the ritual…nearly at 12-12:30am the visiting stops and then it’s time to spend time with family members.

That year we all went to bed nearly at 2 am after spending some beautiful moments with the relatives and the family members.

The original pic has been taken in Kodak KB10.