Few days ago, I went for a very short tour (a half day), I will make a post about visiting that wonder place. while returning we had to avail bus but the nearest bus stoppage was fifteen minutes walking distance, we were feeling very tired and there were no vehicles like rickshaw or Toto were available so that we could hire, we decided to stop the bus and avail it, there we met some civic polices who were doing their duties, they said that they will stop the bus for us. 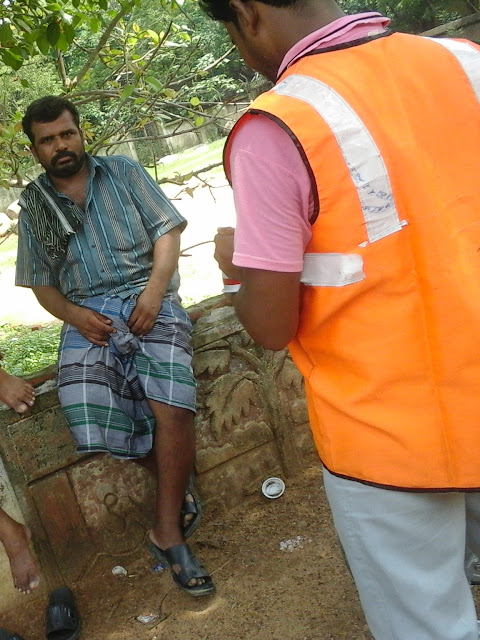 When we were waiting then the civic polices got the instruction to stop the trucks in one side of the road because the road ahead has met a huge jam, in between five minutes a long line was created by the trucks, some truck drivers came out from the trucks and sat beside us under the shade of the tree. Among them, a truck driver was asking about the condition of the road ahead, hearing his pronunciation in hindi I realized he is from the area of great actor Rajinikanth, so I got interest on him because this was the first time I got any south Indian in front of me and got chance to talk, so I started to ask about him and his life, what I came to know is---

His name is Venkatesh, he is driving truck for last twelve years. He is married and has two children, one a girl of 14 years old and a boy of 12 years old. He is coming from Madras and will go Guwahati, it takes long 9 days by road if the route is clear but if he meets jam then it needs extra two days in average.

So after asking about him and his family I asked the ungentle question, actually it was the sudden outcome of my high curiosity, I asked about his salary and came to know the amount is 20k per month. The truth is, hearing the amount I felt very relaxed, it made me happy. I came to know that he has travelled lots of places like Rajasthan, Gujrat, Punjab, Madhya Pradesh, Pune etc to deliver the goods in his truck. There was another driver from whom I came to now that they work six months in a year.

Venkatesh informed me that after returning Madras he will get holidays for two days and then he has to start his journey for another delivery.

Now the most interesting thing is, he was carrying milk for the Indian army of Guwahati base.

But one thing that made me sad and this was the last part of our conversation is, he was showing his hands and was showing how it has bent a little from under the elbow for continuous driving---just at that moment the civic policies informed the drivers to move ahead and making a small jump from the half wall he entered into the truck and went away.
Posted by Jyotirmoy Sarkar at 6/28/2016 06:57:00 am